The Ngakde curriculum combines the study of philosophical texts and practical meditation exercises. Theory and practice have to go hand in hand to come to the right result. Contemplation establishes the connection between theoretical understanding and practical realization

Students receive a personalized curriculum that will take several years to complete, depending on the commitment and time available. On this page curriculum and practice are briefly documented. This curriculum forms the foundation for the qualification to become a Lama.

Rinpoche maintains a Reading List with literature on different topics and recommends to read the books in the given order.

The Ngondro is the basis of all practice in the Nyingma school. The Ngondro is often called the preliminary practice, but it is much more than that. The Ngondro is a set of meditation practices forming the foundation of any subsequent practices. The Ngondro consists of the following parts which, if diligently and correctly practiced, can lead to liberation.

The number of repetitions given are minimum requirements. This is a self paced curriculumen and the duration depends entirely on how much time we invest and on the circumstances and individual possibilities. Prostrations in particular require an appropriate physical condition. Students with physical limitations and older people can, upon request, have an alternative practice to prostrations.

Further information and documents for enrollment are available in the Retreat Center Tharpaling and the regional groups.

The last part of the Ngondro is the Guruyoga practice. It is also the transition to the Mahayoga path and remains the lifelong practice of all Vajrayana practitioners. Guruyoga is the very central part of development, so it is not really appropriate to specify the length and time to be spent on it. In this meditation practice at least 100,000 Prostrations and 10 million Guruyoga mantras are accumulated, this can take a few years.

Depending on the result of a single retreat at the end of the Ngondro, practitioners are introduced to Trekchöd which is a Dzogchen practice.

Depending on the result of the Trekchöd practice, empowerments for the three root Sadahanas (Lama, Yidam, Dakini) follow. The beginning is the TsoKyeThukTik Sadhana (Lama practice) which requires extensive preparation. This includes the creation of daily and long-term tormas, building the mandala, setting borders and comprises a comprehensive theoretical part which is explained in detail. 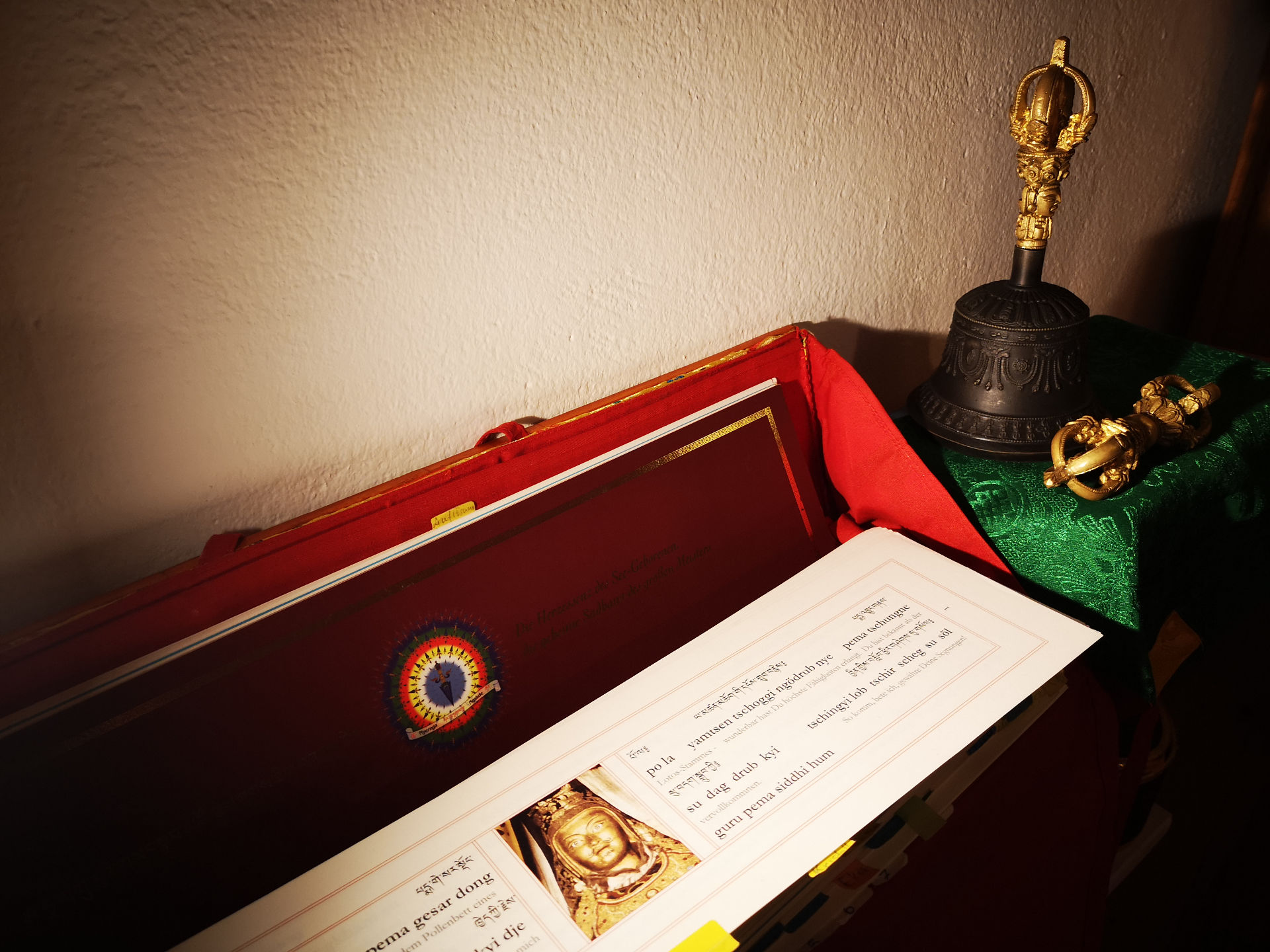 The Ngakde Shedrup curriculum has continuously grown since the foundation of the first center. The core of the philosophical teachings are writings of Dudjom Rinpoche, Longchenpa, Shantideva, Mipham Rinpoche and Asangha. The curriculum is taught in lectures to serious practitioners both in retreats and through distance learning. It contains (as of 2020) over 1,300 hours of material. All teachings should be listened to at least 3 times to allow them to sink in. Having conlcuded this part of the study it sums up to about 4,000 hours of thorough study of the Dharma.

The teachings and practices of the different Buddhist vehicles. Rinpoche commented on this traditional text in the years 2007 to 2011 in retreats and through distance learning with translation into German by Almut Berkane.

Background knowledge of the theory and practice of the Vajrayana foundations. The lectures were given in years 2010 to 2013 in retreats in Germany and translated into German by Almut Berkane.

An introduction to Nyingma terminology and a basic text of Buddhist knowledge. The lectures were given in years 2013 to 2015 in retreats in Germany and have been translated into German by Almut Berkane.

The entry into the way of the Bodhisattva: the Bodhicitta motivation and its practical application. The teachings were given in years 2015 to 2019 in retreats in Germany and as distance learning courses and translated into German by Almut Berkane.

Foundational text on logic, valid knowledge and the inseparability of the two truths. Rinpoche taught The Wisdom Sword in 2019 and 2020 in retreats in Germany with translation by Almut Berkane.

Ornament of Sutra: View, meditation, behavior and realization of Mahayana. Rinpoche teaches the Mahayana Sutra Lamkara since 2020 in retreats in Germany with translation by Peter Prochaska and Almut Berkane.